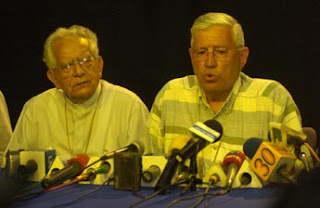 British and American Govts Warn their Citizens about Travel to Bolivia

Amidst growing tensions between the Government and the Eastern States, the Bolivian Roman Catholic Church have appealed for dialogue. The Church also pleaded that protestors avoid activities and provocative gestures which may result in violence.

AUTONOMY vs CENTRAL GOVERNMENT
Supporters of the government celebrate the approval of the new constitution of the country and eagerly await the campaign for the national referendum where the constitution will either be endorsed or rejected.

On the other hand civic leaders and elected officials from Eastern Bolivia have declared the proposed new constitution as illegal. They've come up with new statutes which gives them autonomy from the central government. These new statutes reflect the nationwide referendum which was held 3 years ago; it gave states the right of autonomous self rule. The new constitution, also mentions autonomy for the states but does not make provisions for the autonomy envisaged by the Eastern Bolivian states. This is a major source of contention, conflict and ill feeling between the central government and the leaders of Eastern Bolivia.

SECESSION?
The central government might declare these acts of proclaiming autonomy on the part elected officials & civic leaders from Eastern Bolivia as seditious and secessionist. If a state of emergency is declared and troops are sent to arrest these leaders, then armed conflict might be possibility. God forbid such an outcome!

Cardinal Julio Terrazas and Archbishop Abastaflor (seen in the picture above), the top representatives from the Roman Church called for a press where they pleaded for all sides to avoid confrontation and violence.

TRAVEL WARNING
Meanwhile the British and the American governments have issued travel warnings to their citizens about the security situation, or the lack of it, in Bolivia.

Bolivia in her recent history has stepped away from the brink in the midst of chaos and have always found temporary solutions which kicked the problem further down the road.

Bolivia is the Lord's hands! Have mercy on us oh Lord! Have Mercy!
Posted by Bolivian Beat at 2:10 AM