I used to pay $US1.50 for a simple lunch at one of my favorite restaurants. It now costs close to $US3.00. Prices, especially food stuff, have soared. And like a fatal epidemic, prices of other consumer goods have also fallen victim to rising prices. I´ve been here 14 years; this is my first experience of rabid latin american inflation.

The government accuses business corporations of hoarding and have decreed a temporary ban on exports of locally produced food stuff. The business community have predictably pointed the finger at government mismanagment.

The lower middle class and the poor are the hardest hit. A watchmen told me this morning - we just eat less and our stomachs get smaller. And to make things even more difficult, salaries have not risen to match rising prices. 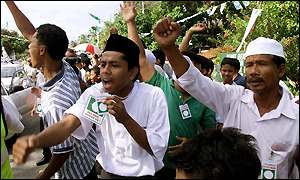 Something is happening in Malaysia...
Posted by Bolivian Beat at 6:58 AM 3 comments: