FUTURE OF THE ANGLICAN COMMUNION!

DRAWING A LINE IN THE SAND

Close to 1200 Anglicans - Bishops, clergy and laypeople have gathered at a conference, Global Anglican Future Conference, (GAFCON) in Jerusalem from June 22nd to 29 to chart a new course in the Anglican Communion. All the participants in one way or another view the consecration of Gene Robinson, a practising gay cleric, as bishop in the American Episcopal church as having brought about an irreconciliable division between the more liberal leaning northern hemisphere (Britian, US & Canada) and bible believing anglicans from the south (Africa, Asia, Latin America). There are of course exceptions to his division. British evangelicals join with the conservative south to condemn the consecration of a gay bishop. American Bble believing anglicans have either left the episcopal church or chosen to fight for their cause. The liberal Brazilian province stands with their sponsors in the US.

REASON FOR THE DIVISION

This rift could have been avoided if the present Archbishop of Canterbury, Rowan Williams, had consistently stayed true to the decisions by the Primates to discipline the American Church. The deadline to discipline the wayward American church in September 2007 passed without any action on his part. Many, within the evangelical Anglican camp, lost confidence in him as a result.

At play is the Lambeth Conference, a special meeting of all the bishops in Anglican Communion who meet once every ten years. They are scheduled to meet in July this year. A large chunk of the African bishops could not in their conscience attend this conference because Bishops in the American church who approve of the blessings of same sex unions were invited. Gene Robinson, the gay bishop, was not invited as a move to placate conservative Anglicans. Hence the decision to build an alternative evangelical voice i.e GAFCON in Jerusalem. The conference seeks to unite those who believe in biblical authority with the intention of building a structure/network which opposes and goes beyond the current Canterbury policy which seeks to reconcile those who believe in the integrity of the gay position with those who don't.

There are also however quite a sizeable number of Bible believing Bishops, clergy and laity who believe that a way can be found within the present structures to save the Communion from the homosexual lobby. Many of them are attending GAFCON and Lambeth. Some, the conservative Bible believing institutionalists, have decided not to attend GAFCON, viewing it as schismatic and will only attend Lambeth. I respect those who have chosen to work within the present structures and I admire the prophetic gumption of those who've taken steps to build a structure which does not have as its centre the Archbishop of Canterbury.

A PERSONAL TAKE : DIVISION AS JUDGEMENT

The Anglican Communion has never been mired in such controversy as the current one with the exception of the tumultous events of the Reformation which caused Rome to split from the Church of England!

Well, division is sometimes the result of God using the sword of his word to divide or separate the good from the bad. The Bible is rife with the language of division: the wheat from the chaff, sheep from the goat, light from darkness. It is a necessary but unpleasnt experience: having the sword of the Lord to penetrate and divide us before he puts us back again on His terms (Heb 4:12; Matt 10:34; 1Cor 11:19). The divisions emerging within the Anglican Communion strike me as part of a fiery process which will burn away our sin.

Lord have mercy on us all!! 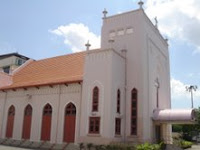 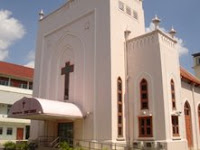 Here are 2 photos of Christ Church, a Tamil speaking parish, where I'm serving as Vicar. If God wills I will be here for about 2 years. And then return to Bolivia.

Christ Church is probably one of the very few, it could even be the only, Tamil speaking congregation which has a high proportion of middle class and professional Tamils.

The first Sunday service, a traditional eucharist is at 8 am; a small punjabi congregation meets later at 10.45; an english speaking service is conducted at 5pm and an outreach to Tamil workers culminates in a 7.30 pm prayer and praise.

The usual midweek meetings and activities coupled with the church's kindergarten keep the place humming.

There is much to be done in the parish. I have a busy schedule and only God's grace keeps me afloat!!
Posted by Bolivian Beat at 2:19 AM 4 comments: