Thank you for your prayer support in these trying times. Praise the Lord for all of you! Serving in Bolivia is like a never-ending David and Goliath battle.

A few days ago during my weekly meeting with the clergy through zoom, we received reports of an increasing number of COVID-19 related deaths and infections. Except for one congregation, the rest have gone back to digital services.

Pray for the church's zoom driven discipleship programs to thrive and grow during the week. Together with the senior clergy, we are working towards a national leadership training program in March...pray for the Lord to equip His Church to face the challenge of making disciples from the COVID-19 harvest. Pray for anointing, confidence, and for humility to learn.

Pray for a revival that will move many to Christ and pray for the church to reap and disciple this harvest!

The doctors and frontline medical staff lobby for the latter because health services have broken down again before the avalanche of cases in the hospitals.

Meanwhile campaigning for the regional elections on March 7th, to elect governors and mayors, continues unabated without much interest in social distancing. Some candidates have died and infections continue to mount. Lord have mercy on us!

One silver lining is the cancelation in February of the annual "Carnaval" - 3 days of debauchery, drunkenness, waste, and deaths from fights and road accidents. Sadly, only the COVID-19 threat, has the muscle to overcome the big financial interests (liquor companies) that prop up Carnaval.

Pray for the Anglican church to GROW and find its voice and testimony in the midst of a growing national tragedy. We have perhaps yet to see the worse of COVID-19.

Pray for Michelle n I to not lose our bearings and to find the quality time to build up each other in Christ. We work from home these days and spend most of our time in this self-imposed confinement.

Thank you once again for your support and intercessions.  PTL!

Posted by Bolivian Beat at 6:45 PM No comments: 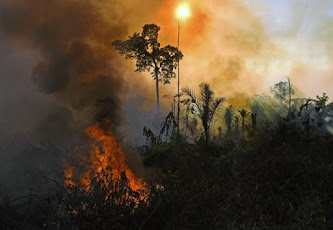 GOD'S MERCIFUL JUDGEMENT!
If we deliberately keep on sinning after we have received the knowledge of the truth, no sacrifice for sins is left, but only a fearful expectation of judgment and of raging fire that will consume the enemies of God Hebrews 10:26-27
...our God is a consuming fire - Hebrews 12:28-29

Judgment offends our charitable instincts and doesn't sound optimistic enough to the contemporary ear.
But it's almost impossible to read the biblical narrative and not bump into judgment: its precedents and its results. The writer of the letter to the Hebrews talks about the fearful expectation of judgment and raging fire.
Most of us want an immediate word of consolation in the midst of our losses and misery; judgment elicits guilt and not the sort of consolation we yearn for.  And how does one sweeten the fearful expectation of judgment?
Jesus prophetically denounced the Pharisees and then spared no bones in invoking judgment over Israel, cities, and the nations. And it's especially difficult to ignore judgment if one adds the woes in Revelations, the last book of the bible.

His judgments although retributive, are by n large restorative and merciful when set within the universal intent of scripture. And his Son's death on the cross sort of sums up the retributive-restorative-merciful matrix. He submitted his Son to the inevitability of His judgment not to condemn but to lovingly satisfy the thirst for justice and reveal His new creation.
Hence we testify to His merciful judgments with broken hearts, pleading for salvation.

Some feel uncomfortable talking about judgment cuz it makes them vulnerable to accusations of self-righteousness. And of course, they're right.
And we shy away from the language of judgment because we perhaps don't want, to somehow, misrepresent God and "blame" Him for natural disasters and evil in the world. It's easier to blame impersonal natural forces and bad people. This line of reasoning leaves God either out of the natural process, or it makes Him out to be servile to nature and human folly. Many are content to declare a mystery here and move on. Not so fast. Maybe we shouldn't move on. Like Job, let's get to grips with the Holy mystery of God, shed tears, wrestle with our doubts, and go to the Cross, cling to His promises, and - Let God be God.

Christ's cruel death on the cross, hovers, like an eagle, over horrific natural disasters, evil, and sicknesses in human history; His suffering and tears mingle with ours and vice-versa. Christ bore our judgment; and transforms our victimization and helplessness not only in His death; but also in the hope of His resurrection. And it's in His resurrection and pilgrimage to the heavenly Jerusalem where God's judgment will find its significance not as the final chapter of our story, but as a necessary stepping stone to the greater glory of our heavenly redemption in the New Jerusalem!
So, let the biblical testimony bend the contemporary ear to listen to the eternal hope of judgment!

Posted by Bolivian Beat at 9:27 AM No comments: