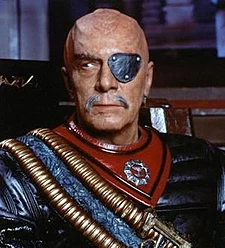 Christopher Plummer, an outstanding Hollywood actor, will be remembered for his portrayal as General Chang in the Star Trek movie, The Undiscovered Country.
He played the role of a nasty warmonger, an evil genius who tries to sabotage plans, by people of goodwill, to make peace between the Federation and the Klingons. Plummer's performance, a far cry from his role as a gentlemanly widow in The Sound of Music, eclipsed the rest of the cast in the Star Trek movie.
The make-up artists did a great job on him: the battle-scarred face, the patch on his left eye, and his bald look accentuated his smoldering grunts and the evil intent of his smiles and gestures. And they also made him spew several Shakespearan lines to complicate and dignify the thuggish Chang character. Plummer's brilliance will be missed.
Posted by Bolivian Beat at 7:02 PM No comments: