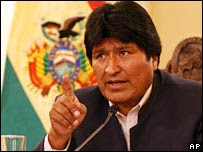 BOLIVIA ON THE BRINK!

- President Proposes a Referendum to Break the Impasse-

The deadline for the constitutional assembly to present a new constitution to the legislative organs of the nation (and then to Bolivia in a referendum) is next week - 14th of December. The opposition has boycotted the proceedings of the assembly because of disagreements over procedures and the margin of approval of the final text. The assembly has gone ahead and is close to approving a new constitution by a simple majority and not a 2/3 majority.

The governors of 6 states, from the valley and lowlands of Bolivia, are crying foul over the president's decision to reduce their alloted budgetary expenses and the way in which the new constitution was put together in the constitutional assembly. They called for strikes and civil disobedience. The whole nation has come to a standstill and the political process has broken down.

President Evo Morales has proposed a special referendum which would give the nation an opportunity to choose between his policies and the ones put forward by the governors from the lowlands and the valleys. This is a new idea and sounds like a way out of the crisis. Some in the opposition, as a first step, however, want the work of the constitutional assembly to come to a halt. The governors are laying conditions for the referendum.

Bolivia faces an uncertain future in an environment where there are no signs of concessions or meaningful dialogue.

difficult times for the country

Such stories force me to my knees to thank God for Singapore despite....