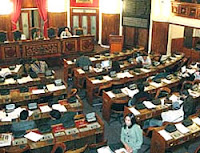 ITS GETTING TENSE IN BOLIVIA!!

A referendum will be held within 90 days to endorse the new constitution which was drawn up by the constitutional assembly.

4 states (3 from the East and 1 from the Valley) in rejecting the legality of the new constitution have drafted a set of new articles which give them autonomy from the central government.

The government has declared the actions by the Eastern states of Bolivia as irregular, illegal and is sending troops to take control of national institutions in Santa Cruz, the centre of dissension in the East.

In the light of a worsening situation many institutions e.g the church, business interests, civic groups etc, have banded together and rejected violence in the nation.

Posted by Bolivian Beat at 4:42 AM