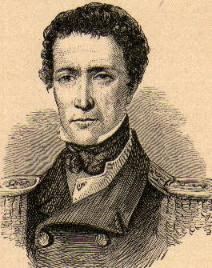 WHO IS ALLAN GARDINER?
Many of us, within the Asian mission fraternity, have never heard of Allan Gardiner. We are familiar with Hudson Taylor, William Carey, Robert Morrison, Mateo Ricci, Sadhu Sundar Singh etcc..

Allan Gardiner, was founder of the Anglican mission society South American Mission Society. He, a naval captain, travelled to Asia and Africa. His passion was to see the gospel proclaimed to the indigenous people of South America.

INSPIRATIONAL LAST WORDS
He died tragically on the coast of the Tierra Del Fuego, the tip of South America in his attempt to reach the Yagan Indians with the gospel. The ship which brought him to South American coast was destroyed by bad weather. He and his friends scrambled to the beach and were left stranded in a hostile environment. The Yagan indians, the people Gardiner was trying to reach, attacked them. Gardiner and his team, weakened by hunger and cold weather, finally died.

He kept a diary of his last days; here are some words from a letter he penned, just before he died, to his family:

If a wish was given to me for the good of my neighbor it would be that the Mission inTierra Del Fuego be pursued with vigor. Butt he Lord will direct and do everything because time and reason are His, your hearts are in His hands...".

HIS LEGACY
Gardiner was an amazing man. His ability to bounce back from rejection, especially in Africa and Britain is inspirational. He, not unlike the apostle Paul and other missionary heroes, had the mysterious grace to derive energy from opposition, hardship and rejection.

He did not attract much attention nor garner much support in his attempts to proclaim the gospel in South America. His death however sent shockwaves in Britain as people gathered around the cause of sending missionaries to South America.

Allan Gardiner's death raised the profile of the South American Mission Society (SAMS) and gave it an impetus it never had while he was alive. He was a martyr in the fullest sense of the word. It is my priviledge to share his story and connect him to the Church in Asia through this blog and sermons.

His sacrifice prepared the way for many to serve in Latin America, including me. His death was not in vain. And for that we praise the Lord!!
Posted by Bolivian Beat at 5:05 AM

Allan Gardiner - what a hero of faith.