This is a photo of my uncle Edwin's marriage to my aunt Emily. My uncle, a warrant officer, was a shipwright in the Royal Malaysian Navy. She was a nurse, a matron in the government hospital. They were very much in love.

Uncle Edwin passed away several years ago. They have 2 sons, Christopher and Michael; and a daughter, Angeline.

I am on my uncle Edwin's left. He helped me arrange my tie before we went to the church for the church service.

On aunty Emily's left is my sister Rebecca. My father and mother are behind the newly weds.

My uncle Edwin was my mother's younger brother. He and aunty Emily were married in Johore Bahru, Malaysia. 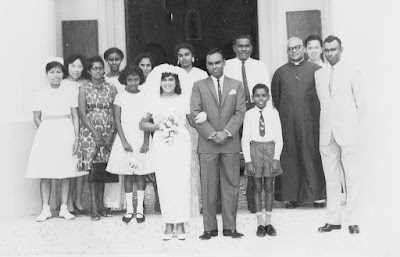 Posted by Bolivian Beat at 7:58 PM