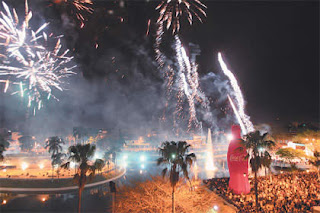 Yesterday Santa Cruz celebrated its 199th anniversary. Note the fireworks on the photo on your right!

My wife, son and I lived in Santa Cruz, Bolivia for 14 years. Elijah, my son, was only 3 years old when we first arrived. Michelle and I, being young missionaries, were struggling with learning the language and adapting to Bolivian culture. Cruceños, know how to celebrate and have a great time. Brass bands fill the air with the sound of drums, trumpets and trombones during all sorts of celebrations. I kinda miss the people dancing and milling in the streets, amplified music blasting away from sound systems in cars, laughter, animated conversations, traffic jams. I certainly dont miss the urine on the streets, broken beer bottles, and the permissiveness these celebrations unleash.

Anyone reading the news would also know that Santa Cruz is the centre of opposition against the central government and the president Evo Morales. I have written many posts on this subject. Just click on Current Affairs. In recent months the nation has been preocuppied with the upcoming general elections in December. The president is expected to win and his party will probably be returned to the legislative assembly with a majority.

Santa Cruz, a gateway city, is a spiritual hub. You just get the feeling that this city has a special place in the Lord's overall plan for the nations. The churches here are vibrant and there have been concerted efforts to reach out to the lost and get involved in overseas missions. Private universities with a young student population are also springing up.

To say that we miss Santa Cruz is an understatement! The good news however is that we shall be returning soon to this city. More news about this in my next post!
Posted by Bolivian Beat at 7:17 AM