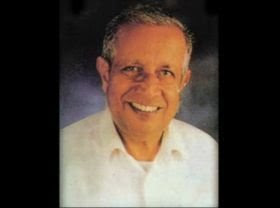 Voice for the Voiceless

I recieved news of JB Jeyaretnam's death through a SMS at a meeting. I was shocked because of the suddeness of his passing away.

Life seemed fragile. A great man had died. A heart attack was the cause, I found out later.

He was not a stranger to my family. Scenes of our past encounters flashed through my mind: a chance meeting in a lift; bumping into one another in the streets; discussions in church, buying his book.

We met several years ago. I was as a young deacon in St Andrews Cathedral. He was a server and carried the cross during the procession at the 8am service. He had an easy smile and fulfilled his duties with sobriety and dedication. We chatted about family and life in general. I lost contact with him after leaving the Cathedral. He will certainly be missed.

Jeyaretnam was a special man who pulled no punches, especially when locked in debate with his political opponents. The parliamentary debates between him and MM Lee were riveting. He gained their respect for his tenacity and perserverance in the face of huge obstacles and attacks. Singapore's Prime Minister Lee Hsien Loong, in a very unusual gesture, mentioned Jeyaretnam in a parliamentary speech as a positive example sticking it out in Singapore through thick and thin.

Singapore is no paradise, especially for the poor. It has its fair share of people who struggle to eke out a daily living. And believe me these people struggle! They do not win scholarships nor are they given medals during national day celebrations. Wealth is supposed to trickle down to them. And sometimes this trickle is a literal trickle, crumbs from the table. Without these strugglers a wealthy economy is only an idea in a textbook.

Falling through the cracks the marginalized face isolation and poverty, they dont fit into a fast moving urban city nor are they selling points of a successful system. You seldom see them in church on Sundays. They're busy working, hustling for every cent in order to meet basic needs and pays the bills. Its easy to sideline the poor as part of a "small" social category and claim the sanctimonious priority of keeping one's eye on the whole picture of a nation's prosperity. Strange how the whole picture seems to benefit only a certain sector.

Their voices are drowned out by statistics and pragmatic reality. There was a need for someone brave enough to respect their dignity and speak for them. Jeyaretnam was such a man. He speak up for them. Seah Chiang Nee a former journalist characterizes him as someone ready to fight for the ordinary folk, especially the poor:

The greatest loss is felt by lower-income people who feel left out by “elitist” policies that cater more for profits than their welfare.

This class of people regards Jeyaretnam, a long-time socialist, as someone who genuinely cared and was ready to fight for the ordinary folk, especially the poor.

JBJ Jeyaretnam, voice for the voiceless.

His speeches and work as a politician arose out of a conviction that the weak and oppressed needed to be looked after and empowered. Man is not a digit in the economy but a sacred being made in the image of God and worthy of treatment befitting his dignity.

He was a patriot - a citizen fulfilling our Lord's calling to love our neighbour.

His legacy? I'd like to think of him as a voice for the voiceless.
Posted by Bolivian Beat at 9:18 AM

Thanks for writing this warm and personal tribute.