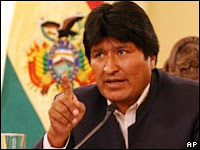 The move was the government's most dramatic action yet against a wave of violence this week in provinces opposed to the leftist leadership of President Evo Morales. The violence had prompted widespread speculation that the government would declare a national state of siege.

But Friday's announcement was limited to Pando, where the order limits public gatherings, bans protests and imposes a midnight-to-6 a.m. curfew.Morales warned Thursday that "patience has a limit," as his nation endured its third day of clashes and attempted sabotage of natural gas pipelines.

On Friday, amid relative calm, officials signaled that a harder line was likely."We are not going to tolerate any more the actions of radical and violent groups that are only causing confrontations among Bolivians, causing pain and suffering among brothers and threatening the national security," Gen. Luis Trigo, Bolivia's military chief, declared in a statement.

Outnumbered troops and police officers have generally stayed out of the way of violent groups such as those who sacked government buildings in the eastern city of Santa Cruz, a center of opposition to the central government in La Paz. The general also rebuffed an offer of help from Venezuelan President Hugo Chavez, a close ally, who this week pledged to come to Bolivia's assistance should Morales face a coup. The armed forces, Trigo said, "emphatically reject foreign interventions of any kind."Across the region, many are worried that the nation of 9 million could veer into civil war.

"There is no question that these conflicts this week have pushed Bolivia farther toward the abyss than at any time since the return of democracy a quarter century ago," Jim Shultz of the Democracy Center, a nongovernment group based in Bolivia, wrote in his blog. "And what makes it so is the absence of any obvious way for it to end."Bolivia is deeply divided even though Morales won 67% of the vote in a national recall referendum last month.

A conservative opposition bloc comprising the leadership of five of Bolivia's nine states is demanding greater autonomy and a larger share of revenue from natural gas and petroleum sales. Most energy fields are situated in opposition strongholds.Both Morales and Chavez have accused Washington of working with right-wing agitators in Bolivia to topple the president, an allegation denied by the Bush administration.Bolivia and Venezuela expelled their U.S. ambassadors this week in protest against Washington. The State Department responded with expulsion of the Bolivian and Venezuelan envoys.On Friday, the U.S. Treasury Department imposed sanctions on two Chavez aides and Venezuela's former interior minister, Ramon Rodriguez Chacin, for allegedly aiding leftist rebels in Colombia.

Morales was scheduled to meet Friday with opposition Gov. Mario Cossio, of gas-rich Tarija province, in what was described as an effort to head off further conflict. However, the daily La Razon reported that Vice President Alvaro Garcia Linera participated instead of Morales."I am completely convinced that this is the last opportunity to begin a process of reconciliation and leave behind the process of confrontation," Cossio told reporters before the meeting.As the unrest eased Friday, an atmosphere of tension remained in much of the country, according to reports from Bolivia.

Road blockades were causing shortages of food and fuel in Santa Cruz. Long lines were reported for diesel and cooking gas.Gov. Ruben Costas of Santa Cruz province, a leading opposition figure, blamed the central government for the shortages, saying Morales' supporters were exacting revenge. Coca growers loyal to Morales were reported to be blocking the main road that links the central city of Cochabama to Santa Cruz. Pando, home to only 60,000 people, is an Amazonian state that borders Brazil and counts nuts and latex among its main products.

Thursday's violent confrontations in Pando resulted in at least nine deaths, the highest toll yet in Bolivia's civil conflict. Media accounts from the isolated zone indicated that most died of gunshot wounds.Unconfirmed reports circulated Friday that six other bodies were found in the Tahuamanu River in Pando.

One government official, Sacha Llorenti, who holds the title of deputy minister for social movements, was quoted in news accounts as labeling the killings a "massacre" by anti-Morales gunmen.
Posted by Bolivian Beat at 9:59 PM