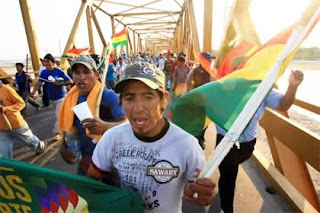 Here is a picture of mobs, followers of the government, entering the periphery of Santa Cruz with sticks and weapons.

Armed groups in Santa Cruz are ready to engage these mobs in violent confrontations.

All of Bolivia is hoping and praying for a settlement which will bring to an end this seemingly never ending conflict between the highlands and the lowlands.
Posted by Bolivian Beat at 9:00 AM