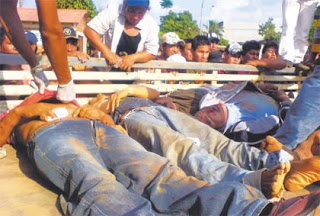 Pando, a small state in Eastern Bolivia (lowlands) was the scene of major confrontation between the government and political and civic leaders from the East.

The government's decision to use the newly won revenues from oil companies as a handout to the elderly and a plan to go ahead with a nationwide referendum to approve the new constitution was the spark that set the lowlands on fire.

Eastern Bolivia is now entangled in a violent engagement with the government. Sectors of the local population under the leadership of civic leaders have clashed with police and seized government buildings. The army is on alert. The President's para military are heading toward the East. Its spinning out of control.

Is the stage being set for the final showdown??
Posted by Bolivian Beat at 2:45 AM