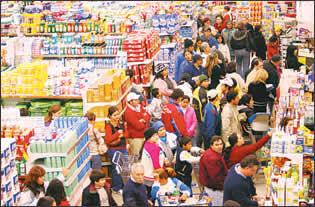 SANTA CRUZ BEGIN TO STOCK UP!
6 States Go On Strike
There are 9 states in Bolivia; 6 of them began a nationwide strike today.
Folk in Santa Cruz queue up to stock up in anticipation of the strike against the government's unwillingess to cede to claims made by representatives from 6 states in the Constitutional Assembly. This is 2/3 of the country! At stake is the legitimacy of a new constitution which has yet to surface. The government is moving ahead with its plans to present a new constitution to the populace at a referendum. And leaders from the 6 states suspect that the governments porposals will be inimical to their interests.

Competing Interests
One crucial issue is the claim for autonomy on the part of Santa Cruz and the other states which possess rich deposits of natural gas and oil. These states are counting on keeping a major portion of the profits from the sales of these resources to finance projects as determined by regional leaders. The ruling party are of course hoping to use the income to help the poorer regions of the country.

Competing Visions
It's easy to understand therefore the advocacy for a strong political centre in La Paz, by the government in the new constitution. The other states, especially the more prosperous ones like Santa Cruz, as to be expected, are agitating for a constitution which recognizes a more decentralized and federal vision for Bolivia. And folk in Sucre are taking advantage of the situation to insist that they be declared the political & administrative capital of the Bolivia!

The deadline for the Assembly to present the new constitution to the people has been extended to November.

Posted by Bolivian Beat at 7:12 AM

especially when instability means a holiday from school!!