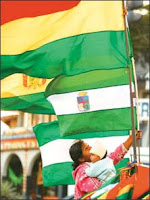 The photo on the right says it all. A poor campesina, with her baby on her right arm, struggles to hold onto to the flag in the face of strong winds. She's selling flags to alleviate her poverty. It's a stirring sight because it speaks of a poor but proud nation battling to overcome the odds.

Bolivians struggle. And its in the struggle where they find divine gifts of mercy and providence. I thank the Lord for the experience of being a part of the on-going Bolivian narrative. He has used Bolivia to change my family and I forever.

Bolivia, on the 6th of August, celebrates its founding as an independant and sovereign nation. The Spanish colonizers were defeated at a decisive battle in 1825 by forces commanded by Gen Antonio Jose de Sucre. Bolivia was named after Simon Bolivar, the revolutionary hero who inspired the continent wide revolt against the Spanish empire.

Bolivia has gone through massive changes since its the founding of the republic.The most crucial being the evolution of the native indian. They were once ostracised and marginalized - a victim of others and themselves. They're now struggling to find their place in one of their own.

Evo Morales, the current president of Bolivia is the first indigenous indian to be elected in the highest office of the land. He has shaken the nation with socialist policies and has allied himself with Fidel Castro and Hugo Chavez. Some sectors have benefitted from his leadership but others have not.

O Lord our Governor, whose glory is in all the world: We commend Bolivia to thy merciful care, that, being guided by thy Providence, the people of Bolivia may dwell secure in thy peace. Grant to the President of this nation, the congress, and to all in authority, wisdom and strength to know and to do thy will. Fill them with the love of truth and righteousness, and make them ever mindful of their calling to serve this people in thy fear; through Jesus Christ our Lord, who liveth and reigneth with thee and the Holy Spirit, one God, world without end. Amen.
Posted by Bolivian Beat at 7:14 AM

This is Stephen Dass. I am presently a priest in the diocese of cnetral Florida. One of the few orthodox diocese in the US. Anyway, are you still in Santa Cruz now? I have a young woman who was a youth in my previous church working as a short-term missionary with SAMS there. Her name is Gretchen. Let me know if you met her.