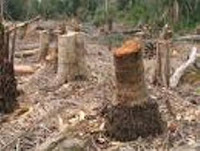 DEFORESTATION - A MAJOR REASON FOR THE FLOODING

According to Cardenal Julio Terrazas and UN officials a primary reason for the floods in Bolivia is deforestation.

The loss of trees coupled with land abuse severly weakened nature's defenses against the impact of constant rain. Yes, the rains were torrential but certainly not the sort that could have caused flooding of this magnitude.

Incredible. Upsetting the ecological balance has brought about death, the loss of homes, destruction of communities, sicknesses, disease and God knows what else. Stranded families will probably drift into the city which will strain the resources of the city's municipality.

Folks, protecting the environment is now a matter of life and death.

We need to go back to our Bibles and work through some of the implications of our role as stewards in maintaining creation. The mandate to rule over the earth in Genesis does not mean abusing God's precious earth and playing havoc with its ecological balance. Is it any wonder that Paul in Romans 8 talks about creation being subjected to frustration and the need for its liberation from the bondage to decay? Its only the promise of future glory and the manifestation of the glorious freedom of the children of God which give us hope in our struggle to evangelise and protect God's creation.
Posted by Bolivian Beat at 11:05 AM

man, left to his own, devices is slowly but surely destroying God's creation.