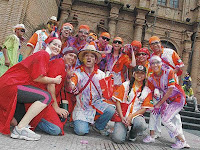 Nothing To Redeem Except Opportunities To Foster Church Fellowship

Many Bolivians, every year without fail, indulge in two days of fun, drunken revelry, parades and promiscuous behaviour. Carnaval in Santa Cruz is a crazy affair. Children and adults throw inflated balloons filled with water at each other; paint and coloured water are now part of the mayhem. People have no qualms about defacing the walls and doors of the city centre city with paint and piss. At times drunken violence takes over as rival groups get involved in punch ups; Carnaval is a dream come true for the liquor industry.

I suppose there are spots of healthy fun during carnaval but by and large it is escapism built on collective indulgence. A growing number of Bolivians find the whole thing ridiculous and leave the city during the revelry.

Many countries in Latin America have their own version of carnaval. The most notorious being the one in Brazil with its bright lights and nude women. In terms of color, sight and culture, nothing comes close however to the carnaval in Oruro, Bolivia.

Groups called comparsas elect their own beauty queens and one them is chosen as the carnaval beauty queen. She is then, like a switched on human bulb, paraded in social events and parades constantly. Carnaval is costly affair. A lot of money is dished out in buying costumes, organizing parades, drinking booze and getting into a prestigious comparsa.

An ethical dilemma surfaced: Is it right for city dwellers to dance and wine during carnaval while the rest of Bolivia is in mourning?

The El Niño floods is a national disaster: lives were lost; damage to property and livelihood is incalcuble, especially for a third world country like Bolivia. President Evo Morales and the governors decided not to participate in carnaval this year;they were busy directing relief operations. It would not have been an anomaly to cancel carnaval and raise funds for the flood victims as a gesture of our solidarity with them.

Lets not forget the religious element - a god named king Momo is the patron deity of carnaval. And Ash Wednesday always falls on the day after carnaval festivities. There's a stereotype of a promiscous reveller whose licentious behaviour is pegged to the assurance that the Ash Wednesday mass will fix his sins automatically. "If you've sinned during carnaval, not to worry; the host dished out during mass will sufficiently take care of any offense against the almighty". This is not a blanket judgement on all Roman Catholics, many of whom take Lent seriously.

Christian churches don't approve of carnaval; they normally take their people away in outlaying areas, away from the city, and put together an edifying programme which includes games, Bible teaching, fellowship and fun. Is there anything that can be redeemed from carnval? probably nothing except for the opportunity to get together and affirm our bonds as church family.
Posted by Bolivian Beat at 8:12 AM