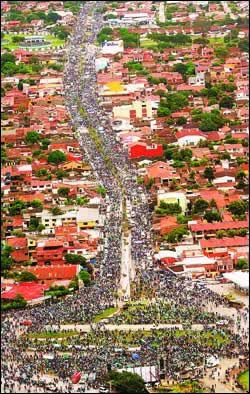 STAGGERING TURNOUT!
Close To 300,000 March For Regional Autonomy In Santa Cruz
The most contentious issue facing Bolivia is Eastern Bolivia's demand for greater autonomy from the central government in La Paz.

Leading this drive for autonomy is Santa Cruz, the hub of Eastern Bolivia. Instead of sending a substantial slice of its income to the central government, Santa Cruz insists on using her financial resources to develop its ailing infraestructure, roads, hospitals etc.

The governor of Santa Cruz and its civic authorities are calling for a referendum in Santa Cruz on the 4th of May to decide the matter. This referendum caps a process which began a few years ago in a massive signature campaign; an earlier referendum gave the movement a degree of legitimacy. Not surprisingly Santa Cruz are expected to vote overwhelmingly in favor for greater autonomy.

The central government however views the referendum as a threat to its plan to implement the new constitution which has yet to be approved by a nation wide referendum. This new constitution is at odds with the proposed articles of autonomy as outlined by the leaders in Santa Cruz. The government is committed to an equal distribution of the nation's wealth. And this push for autonomy is a direct challenge to their socialist vision for the nation.

Charges and counter charges between the central government and the regional authorities in Santa Cruz are a daily affair. All attempts at dialogue have failed. The government has turned to the Roman Church in a last ditch attempt to save the situation.

Yesterday's march was part of this on going narrative.

The photo above from El Deber captures the size of the turnout.
Posted by Bolivian Beat at 7:21 AM